What In The Hell Is Even Happening?

In March 2018, Season to Risk toured with alter-ego band Sie Lieben Maschinen playing songs from all albums at midwest shows including showcases at SxSW in Austin Texas and Valley of the Vapors fest in Hot Springs, Arkansas. A limited-edition vinyl series launched on https://seasontorisk.bandcamp.com

In Fall 2019 THE SHATTERING was released on orange vinyl remastered by Jason Livermore at Blasting Room studio, where it was originally co-produced with Bill Stevenson (Flag, Descendents). SHATTERING vinyl.

In the Summer of 2021, we masked up and played a week of shows through the Midwest including No Coast Fest in Denton, Texas and released a bizarro collection of B-sides, covers, demos and experiments on cassette-only. Dial: 1-800-MELTDOWN.

In 2022 we played a run of shows and started recording new music at Duane's Weights & Measures Soundlab ! 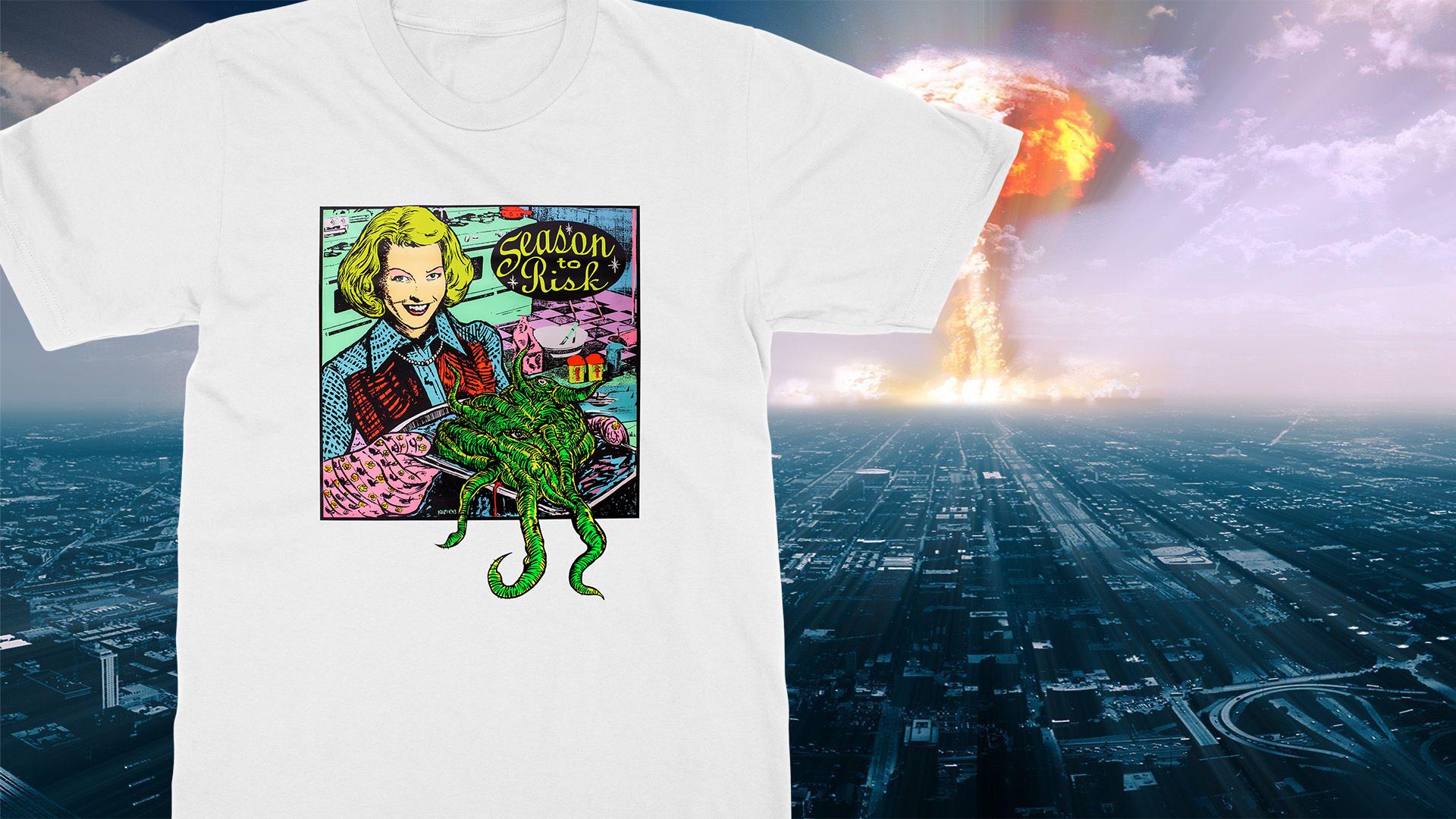 Season to Risk are a post-hardcore / noise rock band from Kansas City, Missouri formed in 1989 by singer Steve Tulipana, guitarist Duane Trower and bass player Paul Malinowski (Shiner). They grew up playing with previous bands at legendary punk venue The Outhouse and got together in college. They built an audience for their genre-bending music by touring relentlessly, playing shows as a young band with legends like Killing Joke, Prong, Killdozer...The band toured constantly throughout North America, returning home briefly for a few days or weeks, on the road 8 - 10 months each year.

Season to Risk got lucky during the early 90s major-label feeding frenzy and signed to Red Decibel which parlayed into Columbia Records. They recorded demos at Sony Studios in NYC, and then lived in Chicago, IL to record their 1992 self-titled first album at Soundworks Studio with engineer Jeff Moleski. The album artwork by Frank Kozik was featured in an episode of 90210 on a speed dealer's door. A music video was made for the song "Mine Eyes".

They lived at Bisi Studios, NYC for the Summer of 1994 recording their second album "In a Perfect World" with producer Martin Bisi. The music was a darker, more complex collection of songs, and the album was received with rave reviews from fans, and puzzled looks from the people at Colombia records. There was no place on the radio for music like this yet, and record stores weren't sure if it should go into Metal, Punk, or "Other" bins. By chance, someone at Sony was looking for a band to play during a scene in the film 'Strange Days' and suddenly the band was in Hollywood, playing the song 'Undone' on the film set.

Drummer David Silver was recruited in 1994, after predecessor Jason Gerken finished drum tracks on the In a A Perfect World album. The cover art was done by longtime friend Derek Hess, which influenced the direction of the music video for "Blood Ugly" filmed outside Portland in an abandoned hydroelectric plant. Another music video was shot live in LA for "Jack Frost" (Dez Cadena of Black Flag was in the video production crew). For over a year, S2R was in a different city every night, which led to total exhaustion by the end of 1995 after tours with Corrosion of Conformity, Monster Magnet, ALL, the Toadies, Babes in Toyland, Plexi, and Unsane, resulting in the cancellation of their upcoming European tour scheduled with CIV. A few events quickly put the brakes on S2R; Columbia Records dropped the band from future releases, and founding bass player Paul quit to join Shiner.

Season to Risk quickly added Josh Newton on bass in 1996, hit the road, and got busy writing music. Tours and shows followed with 7 Year Bitch, Craw, Today is the Day, Buzzoven, Neurosis, Zeke, Calvin Crime, Glazed Baby, Janis Figure...Pooling their resources, they spent most of the next two years building Trainwreck Sound Studios in Kansas City, MO. As floors, walls and ceilings were built, new Season To Risk songs were written, members worked with their other bands, and recording started at Trainwreck, including work by Casket Lottery, The Farewell Bend, Dirtnap, Iron Rite Mangle, Gunfighter and the Pornhuskers. They built their dream studio from the ground up: a 15 x 20 control room, equipped with a 1974 24-channel Auditronics console and a 2-inch tape machine, a 30 x 50 foot tracking room with reclaimed barn wood oak floors, and a huge apartment & rehearsal studio upstairs on the second floor.

Odds are high when you spend most of your time driving that vehicles will break down day after day, wheels will fall off or blow-out, drivers will fall asleep, engines and people will crack or burst into flames. The van once flipped over on a frozen highway in Minnesota. The 22-foot RV rolled backwards with no brakes down a hill in Seattle. They broke down, sometimes daily, in beautiful places all over the country, including the middle of the Golden Gate bridge, and left a trail of dead vans in their wake. Being in a underground band is hard work against hard luck.

In October 1998, shortly after the studio officially opened to the public, a sudden flash flood of a branch of the Missouri river totaled everything in the neighborhood in 15 minutes, destroying the building, their tour RV in the parking lot, their bank account, and almost everything else. They're lucky no one was killed. Luck never gives, it only lends. And the river takes. And then Josh Newton also left to join Shiner.

Fortunately, the self-produced third album was finished prior to the flood, and the band was able to wade through the five-foot deep, freezing flood waters in total darkness out of the building to safety. Unfortunately, they discovered that the album "Men Are Monkeys, Robots Win" (Thick Records) was printed 'out-of-phase', making the songs sound hollowed-out. The label never re-released the printed CD, and that release was barely heard. The remastered mix is now available online/vinyl.

Bass player Billy Smith and guitarist Wade Williamson of Kansas City's Dirtnap joined the band in the studio and for subsequent tours. Legendary punk drummer/producer Bill Stevenson (Black Flag, Decendents) has always been a friend and supporter, and has brought the band on tour with ALL several times. In 2000, "The Shattering" album was recorded with Jason Livermore and Bill Stevenson at the Blasting Room in Ft. Collins, CO, and released on Owned & Operated records in 2001. The Shattering album was more diverse than ever, fusing elements from all of the band's previous work and some new experimentation into twelve heavy, melodic songs. Shows followed with Sleepytime Gorilla Museum, Helmet, No Means No, and many others.

In the early 2000s, band members shattered in multiple directions (see Players), with Steve and Billy writing several Roman Numerals albums, Billy and Wade releasing Olympic Size, and Steve and Josh releasing Sie Lieben Maschinen. The band returns as Season to Risk for a show or a week or a month when we want to.